His research has focused on competitive strategy and competitive advantage, with a particular interest in the evolution of international competitive capability in a group of outstanding New Zealand firms. The Competitive Advantage New Zealand project – CANZ – was funded by the Foundation for Research Science and Technology and became one the largest and longest-running research projects ever funded in the social sciences in New Zealand. The project produced a best-selling book World Famous in New Zealand, and numerous articles in the leading international journals in management and marketing, one of which was awarded the 2009 Hans Thorelli Prize for the article that “has made the most significant and long-term contribution to international marketing theory or practice”. His interest in climate change has developed from previous work on the use of the theory of complex adaptive systems in the context of organisations to conceptualise how social and economic systems might develop in the face of radical changes brought on by climate change. 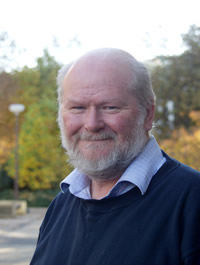 Why the future begins at Blueskin Bay

These days the ODT confronts us with a steady stream of stories about our warming planet. In just the last few weeks: “Dark snow hastens glacier melting” (July21-27 World Section); “Can we do without coal?” (July 14-20 World Section); “Permanent snow and ice just melting away” (July 30th); “Actions against sea level rise identified” (July 19th).  I am someone who has been slow to appreciate what climate change is doing to the planet. I am a business school academic and have spent my professional career trying to understand more about how firms gain advantage over their competitors. A rising sea level just doesn’t come up much in my world.

But a few years ago I got interested in the ways that complex systems work, and how they change over time.  I did this because I found the ideas of complexity helpful in understanding how the myriad of activities within an organisation come together in some kind of cohesive pattern. (And just in case you think that it is managers who create that orderly pattern, consider the case of the famous work-to-rule at British Rail back in the 1960s when the workers did only what the rule-book required and the entire system ground to a halt in a matter of days). So when I slowly became aware of climate change, the ideas of complexity were in my head and the more I read, the more I found myself seeing complexity driving the processes of climate change.

So here’s a quick primer on how complex systems work. It will explain why our future begins at Blueskin Bay. It all begins with feedback: the idea that activities can set off a chain reaction that eventually comes back to affect every activity in the chain. Here are some climate examples of feedback. Ice reflects 80% of the sun’s radiation while water absorbs 80%, so as the Arctic melts there is less and less ice and more and more water and what used to be a shield against radiation becomes a sponge to soak it up: less ice – more water – more warming – less ice – more water – etc. etc until there is no more summer ice in the Arctic. This is called positive feedback: an initial stimulus (less ice) is reinforced and amplified by the feedback chain. Other examples are the accelerating release of methane as the permafrost melts in the high Arctic and (supreme folly) we humans using the retreat of the ice to drill for more oil and gas to throw more carbon into the atmosphere. You can see from these examples that positive feedback loops are powerful forces for change: once they come to dominate activity in a system, they will just get stronger and stronger. Whenever we see change running away on us, there will be a positive feedback loop driving it. Back in 2007, the Intergovernmental Panel on Climate Change (IPCC) predicted the end of Arctic summer ice by 2050. At present rates, it will be gone in less than half that time.

The good news is that all systems also have loops of negative feedback embedded in them and these act to dampen and moderate some initial change. For example, as the planet warms it gets more humid with more cloud cover; and clouds reflect the sun’s radiation. So the planet system has within it feedback loops of both types: positive loops that amplify change and negative ones that moderate change. What is happening now is that the positive, self-reinforcing feedback loops driving us towards a warmer climate are picking up in power and intensity, and the negative loops that act to keep our climate stable are less and less able to maintain the world we know.

In complex systems, periods like this are known as bifurcations – a marvellous word. In a bifurcation the system is disrupted from its old patterns of activity, driven to change by the ever-amplifying forces of positive feedback. Think of an old-fashioned dance held in the Waitati Community Hall back in the 1950s. Everyone is dancing quicksteps because that is what we have been dancing for years. But over in the corner some young-uns are trying out the new craze of rock-and-roll moves, making them up as they go along. Gradually everyone on the dance floor gives up on the quickstep and joins the rock and rollers. All by itself, with no-one commanding the change, the activity on the dance floor mutates from one pattern of activity to another. That is a bifurcation.

Now there are some very special properties about bifurcations in complex systems. First, the change happens all by itself, driven by the growing power of positive feedbacks that reinforce the activities captured in the feedback loop. Quick-steppers just find they look so much cooler copying the rock-and-roll moves so that is what they do. Second, the system cannot revert to its old pattern. The dance example does not work so well here, but you can imagine that after a year or so, the Waitati community would become so used to rock-and-roll that it would just forget what a quickstep was. Come to think of it, I know only two people who can dance a quickstep. Third, the change from the old pattern to the new happens quickly: a brief ‘punctuation’ between two longer periods of relative stability. You can see why this would have to be so: systems require order, without it we fall into complete chaos. If the dance floor is a mix of quickstep and rock-and-roll, people would be bumping into each other, breaking their heels, falling on the floor, shouting for two different kinds of music etc. As the preferred attraction of rock-and-roll takes over, it becomes the new norm and negative feedback again kicks in to stabilise activity around this new pattern. Fourth, many changes in complex systems are relatively small, a few are radically different. Our dancers have learned many ways to spruce up their quicksteps over the years, but this rock-and-roll thing is just completely different.  Fifth, in a large-scale bifurcation the new pattern is unpredictable from the old: you can know all there is to know about dancing a quickstep; it won’t help you do rock-and-roll. Finally, and this is where Blueskin comes in, the new pattern emerges bottom-up, from small groupings of activity that come together in new ways to form new loops – both positive and negative – that define the new dance and these successful new patterns quickly take over the whole system.

The signs are that the climate is already engaged in a bifurcation from a relatively stable state that has persisted for at least the past 650,000 years to a new pattern. The signs are also that we risk a bifurcation on a large scale – possibly as bad as any that has happened since life emerged on earth. The IPCC tells us that if global warming is allowed to go beyond 2°C from the pre-industrial era, we will increasingly risk switching on some very powerful process of positive feedback: melting of the Greenland and West Antarctic ice-sheets, of Arctic summer ice, of the Himalayan glaciers that are the source of water to more than two billion people in India and China, and – closer to home – sustained changes in the southern oscillation that influences our climate here in New Zealand. Although some of these will take centuries to work through the system (and bear in mind that a century is a tiny sliver of time where the planet’s climate is concerned), once they are engaged they cannot be turned off and will take us to a new order of climate whose pattern is unpredictable and radically different from the world we know now. Ice cores taken from the Antarctic tell us that the last time CO₂ reached 400 parts-per–million the oceans were 15 meters higher than they are now.  Then there is the methane now being released from the permafrost. The Permian extinction of about 250 million years ago eliminated between 85% and 95% of marine species and around 70% of land-dwelling vertebrates. One of the mechanisms that is thought to have triggered that disaster was the release of vast quantities of methane from their “Siberian traps”. It is now estimated that up to 50% of today’s life forms would be at risk of extinction if global warming exceeds 3°C. Beware of bifurcations: they can take you places you really don’t want to go.

Will these Armageddon-like futures happen? Yes they could. Like the chaos that would take over a dance floor when everybody tries to leap about any way they like, the transition from one order to the next takes activity closer to absolute chaos. But systems also require order. The approach to chaos can be more or less close depending on how radical is the change in the system. Clearly it is in our (human) interests not to flirt too long with the forces of radical bifurcation, and the IPCC has pointed to many affordable ways in which the risks of excessive warming can be moderated.

But we are slipping from one climate order to another – be it radically different or moderate – and the question arises: where will the new orders of human activity come from that will help us live a much less carbon-intensive life? Answer: Blueskin Bay. Well, that and places like it: from the bottom up; from small local initiatives to larger national and then international arrangements. It is places the size of Blueskin Bay that can develop new ways of making power, commuting, building and insulating houses, eating, because they find it easier to separate themselves from the patterns of activity that dominate the old way of doing things. They are early to see that new patterns of activity are required. This is a phenomenon happening all over the world. While national governments and international negotiations make no progress on climate change, it is local communities that are responding to the challenge.  Closest to home, we have the recognition that much of South Dunedin will be below sea level by the end of the century. An article in the New York Times of 7 May reports that Miami Florida is likewise waking up to its vulnerability. The city is built on porous limestone that is absorbing seawater into the city’s foundations, invading its drains and fresh water supplies. So in a state that is rock-solid republican and where Jeb Bush – that other scion of the oil-loving Bush family – was the previous governor, it is the local level of government that is leading the charge on climate change.

So if you want to see how we are going to live in a world that must wean itself off carbon, look at Blueskin Bay. Better still, don’t stand and watch, get involved. Forget the quickstep, learn to rock-and-roll – it was always more fun anyway.