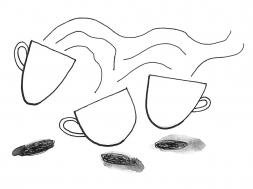 Editor’s note: For many residents of Blueskin Bay, full-time employment means a 20 kilometre each way commute to Dunedin, made more challenging by the bulk of Mt Cargill lying between here and there. It’s a challenging trade-off: enjoy the beauty and peace of living out of the city – and often find a lower-footprint lifestyle than we would in a city neighborhood – but use an embarrassing lot of petrol getting from here to there. Peter Dowden takes a historically minded look at our travel options, projects that have been tried in the past, and projects that might be resurrected in the future. Does being employed in town really mean being car-dependent? For most of us, for now, probably, though occasional travelers have other options. And all of us can look back at what has been tried and look ahead toward what alternatives we might be able to develop in the future.

Blueskin folk have more low-energy, low-carbon options to get to town and back than most of us think. Here I’ll outline all the present options with my thoughts on how they could change in the not-too-distant future. I used to think of myself as a sort of ‘minister of transport’ for the Bay, and I maintained a website entitled “Transport and travel north of Dunedin”. This article is a bit of an update on that.

I’ll start with the most popular current option. To go low-carbon, you could get a more economical car. It would probably need to be quite new, with a good torque rating for all the hill-climbing involved. A high-efficiency engine with fuel injection, especially diesel, would help. Hybrid cars come into their own in stoppy-starty urban-style driving and their fuel economy on rural roads can disappoint, being similar to their conventional car cuzzies. That’s generally speaking, and I claim no specific expertise. It may well be the case that hybrids do quite well here, due to our steep roads into town. This would be a good research project for the energy group to consider.

You could also take all the heavy junk out of your existing car (yes, that load of firewood doesn’t need to visit Dunedin any more times), remove the roof rack if not in use and make sure your car is well-serviced and tuned. Moderate your driving style: I timed myself over many regular Sunday afternoon trips to town a few years back. My trip at the legal limits (100 and 50 km/h) regularly took just 20 minutes. Using a maximum speed of 80 on the highway and 40 around town only increased my travel time to 24 minutes, just four minutes longer. I did not measure my fuel consumption directly, but the theory states that as speed increases, fuel consumption increases even more. It would, however, be kindest to other road users to only drive slowly where there are multiple lanes.

Carpooling and hitch-hiking are other obvious ways to increase the efficiency of car travel. I’m very much pro-hitching, and I used to do it a great deal (as both hitcher and “hitchee”, picking people up), but it should be remembered that the inside of a car is no bigger than a double bed, and we don’t let just anyone into bed with us (well, I don’t anyway), so car sharing is quite an intimate thing and not for everyone.

A few years ago, NZ Transport Agency was planning the Waitati Curve road works (since cancelled). I put a lot of effort in to maintaining the hitch-hikers’ layby at Waitati in the new plans, taking them to task at the planning hearing. They grudgingly put it back in, but if this road proposal ever comes up again, attention needs to be paid to this.

Go Bus Transport (formerly Passenger Transport Citibus) provides a public bus partially subsidised by the Otago Regional Council. It’s a wee bit expensive at six-odd dollars and it goes only three times a day in each direction. On an unspecified date sometime over the next few years the service will  increase to “every 120 minutes”, per the Otago Regional Council’s ‘Regional Public Transport Plan Otago 2014’. When an upgraded electronic ticketing system is introduced, the route will join an expanded city zone structure which will make Blueskin Bay fares go up by a dollar or so, but with free transfer to any other bus when you get to town. More on Dunedin bus fares is at this city website.

Go Bus Transport also runs the local school buses, free for people who go to the “right” schools but payable for the “wrong” schools.If you live in Seacliff or Warrington, there’s no bus. For many years it was possible for adults to travel on school buses and this was sometimes done by folk in Seacliff and Warrington, including me. Unfortunately, the Ministry of Education recently and unintentionally banned adults from school buses, so Dunedin Bus Go is lobbying to get this option back in the next contract round. The only other bus on the coast road is the Penguin Express, an  Oamaru-Dunedin shuttle. Bookings are essential, either at 03 434 7744 or by calling the driver at 027 256 5651. Their services are door-to-door which is nice if you have luggage. Fares are subject to negotiation. The service can also be reached at mail@coastline-tours.co.nz.

Long-distance buses can also be used to and from Dunedin, but short-distance fares on them are not favourable unless booked well in advance or purchased in bulk by using a pass. These services come south and back north again around the middle of the day. They stop at both Waitati and Evansdale, but only for pre-booked passengers; you can’t wave them down. Three companies offer long-distance bus options:

Some people bike over the hill, and good on them. A few years back the New Zealand Transit Authority removed the bike prohibition on the first bit of the highway from Waitati as far as Leith Valley Rd. But biking over that massive hill is a bit much for most people, so what you need is an electric assist velomobile.

A few years back, some Seacliff people were talking to KiwiRail about building a rail trail for bikes alongside the main line. Parts of the line have a service track alongside, and there’s even a track bypassing the tunnel above Doctors Point. But the Mihiwaka tunnel would be an obstacle to a trail to Dunedin.

I was involved with local rail lobby group called Get the Train a few years back. We spent several years promoting rail travel and chartered commuter trains a few times, subsidised by an alternative transport fund which John Key’s government abolished, which took the fun out of it somewhat. Get the Train is still ticking over quietly and might appreciate some new members, so look them up if you are keen and read the stories about the commuter trains. But running a train service is not for the fainthearted: the railway company won’t even let off the handbrake on that thing for less than a triple figure sum. For the same reason, don’t hold yer breath waiting for the regional council to start a train service. But I still believe rail’s time will come again some day.

One thing we did achieve with Get the Train was to encourage Dunedin Railways to include Waitati in their occasional “Suburban Train Revival” days, so keep an eye out for those events, usually in the school holidays.

The “Seasider” scenic train (03 477 4449), operates once or twice weekly over the summer from Dunedin to Palmerston and back, and can be requested to stop en route by arrangement. But the fare is aimed at overseas visitors seeking a comfortable day out and so not really suited to a commuter.

One last option. I tried it; it’s not so bad. But I do miss seeing my friends out that way.