Martin is a 20 year software development veteran, having worked on system in banking, crime analysis, ferry booking, legal aid, and online auctions. He joined the team at emhTrade (the company behind the software that the Blueskin Energy Network uses) in 2017 after meeting them at the Lightning Lab Electric innovation programme in Wellington. He was inspired by the opportunity to be part of the energy revolution, and is relishing the prospect of making a dent in the climate change problem while simultaneously helping people with their energy needs! 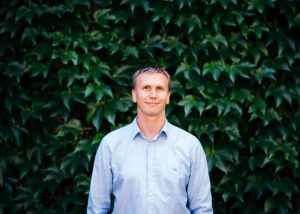 Scroll down for article

Energy is changing. New technologies such as electric vehicles, home batteries and cheap, efficient solar, are being combined with sophisticated software that helps people make the best of this equipment. This is giving people more control over their power usage than ever before, enabling them to save money, save the planet and help their communities.

For most people, electricity has always been a one-way thing. We’re vaguely aware that it is generated somewhere far away in some mysterious building, and delivered to us along some wires but basically, it’s always there when we flick the switch. Solar panels have enabled a very small minority to take a more active part in this process, reducing for their owners the amount of grid power they use, and sometimes adding some extra back into to the grid as well. But most of us are just at the mercy of the system.

This is all about to change, radically. Here’s why.

Recently home batteries are changing this, by creating liquidity in the system and allowing us to store power when it is plentiful and then using that power to reduce grid demand at peak times. Commercial scale batteries are starting to come online, such as Mercury’s South Auckland project, but residential batteries are now common, with many solar panel installers now selling panels, batteries and control systems as a package. Not to mention the fact that electric vehicles are basically batteries on wheels, and electric hot water cylinders can act as batteries by heating water at optimal times, it was a fundamental premise of electricity systems that power supply and demand must be balanced, almost exactly. In other words, if Ben puts the kettle on in Hawera then to make his water boil, James has to shovel a little extra coal onto the fire in Huntly. This means that our power systems have been designed to cope with peak demand, even though we only get anywhere near that level for a few minutes per year.

Electric vehicles (EVs) will be a catalyst for change. The tipping point is likely to be when they reach price/performance parity with the internal combustion engine, which DNV GL says could be as soon as 2024. This will lead to a surge in adoption, vastly increasing the demand for electricity while radically altering the average home’s power use profile. The changes are so significant that the energy system will be forced to adapt, accelerating the adoption of other energy technologies.

Solar panels, electric vehicles, domestic batteries and other energy equipment are highly likely to be adopted at exponential rates in the next few years as costs come down and performance gets better. We’ve already mentioned EVs, while Otago University identified that the cost of solar PV has been halving every 13 months since 2008, and Bloomberg have forecast that the energy storage market will double six times between now and 2030. These technologies will all reach sufficient penetration and make a real impact on energy patterns in the near future.

Together these trends will make a huge difference to energy generation, distribution and consumption patterns. However, unmanaged they could seriously destabilise our electricity system. Imagine if a whole street full of people came home from work at around 6pm on a cold night, turned up their heat pumps and put their cars on charge while cooking dinner. The transformer at the end of that street wouldn’t cope with the load and suddenly everyone would be cold, hungry and stuck at home!

The obvious solution to this is to change the pricing for power to encourage people to consume at different times, with cheaper rates for off-peak power. The night rate is a blunt instrument version of this, and it might stop the transformer going down. But with ubiquitous electric vehicles, chances are it’ll also just create a new, probably higher, peak at the start of the night rate period. Worse, if people only charge at night, then on really sunny days they could be missing out on using even cheaper renewable power and forcing the system to burn coal at night to make up for it!

The underlying problem is that the electricity system is much more dynamic than you might think. Demand varies by time of year, time of day, weather, and many other factors. As we electrify transport but also add in significant battery capacity, the predictability of demand is going to change radically. People will draw from their batteries (including those in their cars) instead of using grid power, but it’ll be harder to predict when and how much this will happen. Similarly, supply is dynamic, in both its price and its renewability. In New Zealand this is of course heavily skewed by the state of our hydro lakes, but increasingly supply from solar power and stored battery power will be added to the mix.

All this complexity means that the time of day that you use power can make a real difference. Solar panel owners are familiar with this – they are motivated to use power when it is sunny to make the best use of their investment. But the same principle applies to grid power too, it’s just that most power companies shield consumers from the price implications of this by providing a fixed rate for power. This protects you, the consumer, from the extreme price peaks that the system does occasionally encounter. For a few weeks around October/November of 2018 for example, the market price for power hovered around $500 per MWh, and even hit $1000 – which is roughly 18 times the normal price! Conversely though, there are other times when market prices go down to virtually zero and consumers still have to pay their fixed rates at those times; confoundingly, prices even go below zero at times!

But it isn’t just about price. Using power at different times can also affect how renewable that power is. As demand increases, there is more chance that thermal (i.e. fossil fuel) generation will be in play. You can directly affect the amount of fossil fuels that need to be burnt by avoiding using power at these times. But if the system is dynamic, how do you know when these times are? And what can you really do anyway, if its cold then you need heating and if it is dinner time the kids need feeding, right?

If you’re a customer of the Blueskin Energy Network, you have access to an early solution. BEN customers can use an app to understand the best times to use power, and be rewarded for how closely they follow the ideal pattern. This advice can be personalised depending on your preference for saving money or using renewable power.

But there is a third option too – the app can also help you share power. This might be an odd concept at first. How can power be shared? Strictly speaking it isn’t the power itself so much as the equipment that provides it. For example, let’s say Jenny has solar panels. On a sunny Sunday afternoon, she decides to head to the beach and while she does, she puts her washing machine on to take advantage of the free solar power, but she is still sending any unused solar power to the grid. The power company doesn’t pay her much for this, and the power just disappears into the system. 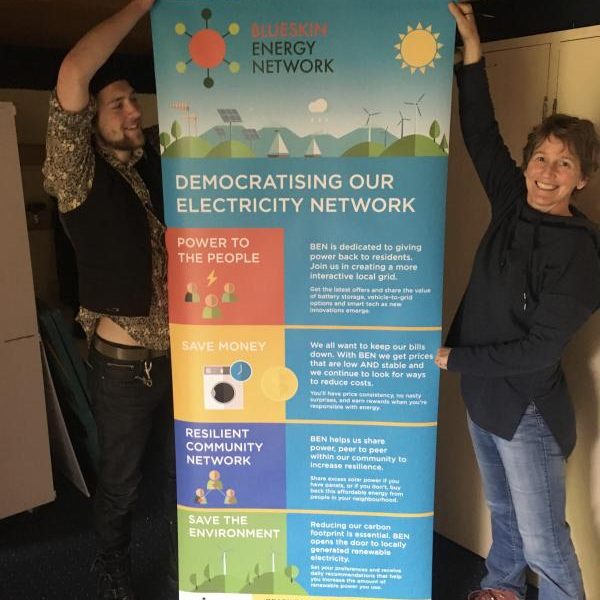 What if instead of just selling this power back to the grid, Jenny could share it with her brother Dave, and mum Karen? She’d get paid more than the power company would pay her, but her family would pay less than they normally do for power. Dave and Karen just need to know when there is likely to be shareable power available, and then use more power at those times.

This is already possible. Blueskin Energy Network customers can use excess solar generated by other Blueskin customers now, and in the future it will be possible to share power stored in batteries, and even to charge those batteries from someone else’s excess solar! This is the beginning of a fundamental shift in the way our power systems work, from a centralised, hierarchical model where we are all at the mercy of ‘the system’, to a decentralised network, in which anyone on the network has some control over their destiny, even if they don’t themselves have any special equipment.

The more engineering-minded reader might be thinking that electricity doesn’t work like this. Jenny can’t put her spare solar power onto the grid and ‘send’ it to her mum like an email. It’s more like adding some extra water into a pipe, it all just gets mixed up with the water that’s already in there, and when it comes out of the tap, who knows whether Mum has got Jenny’s water or not.

This is true. But there is a financial transaction that happens as well as the physical one. And this means that we can design systems around those transactions, which can be used to create different outcomes. For example:

In the first eight weeks of the Waitati School’s solar programme, a weekly average of 140 kWh of excess solar has been exported. That’s almost 100 tonnes of coal.

Thinking differently about how energy can work is what emhTrade (http://emhtrade.com), the company whose technology and insights power the Blueskin Energy Network, is all about. It’s really exciting to be working with the Blueskin community to help them realise their vision, try out some of these ideas, and to see if we can help people and save the planet at the same time!